The heat shock response is an evolutionarily well-conserved cellular defence mechanism against protein-damaging stresses, such as elevated temperatures, heavy metals, and viral and bacterial infections. The heat shock proteins (Hsps) function as molecular chaperones to protect cells by binding to partially denatured proteins, dissociating protein aggregates, and regulating the correct folding and intracellular translocation of newly synthesized polypeptides. Hsps are transcriptionally regulated by heat shock factors, HSFs (HSF1-4 in mammals). Although HSFs are best known as stress-inducible transcriptional regulators, they are also important for normal developmental processes. The repertoire of HSF targets has expanded well beyond the Hsps, and HSF functions span from the heat shock response to development, metabolism, lifespan and disease, especially cancer and neurodegenerative disorders. 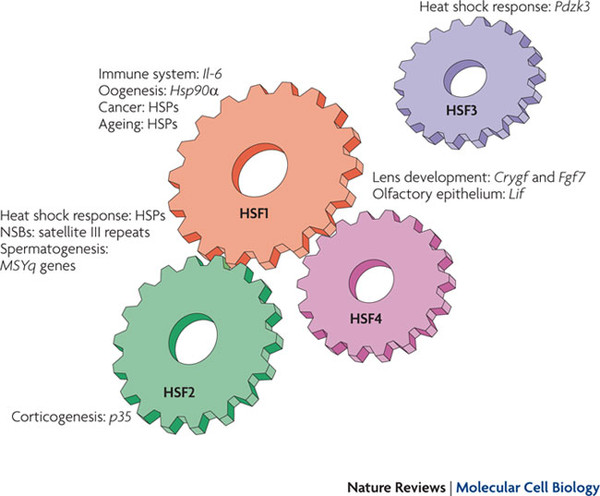 An overview of the mammalian heat shock factor (HSF) family members and their biological functions. HSFs contribute to multiple normal physiological processes and pathologies through direct regulation of their target genes. The HSF target genes that have been identified in vivo are shown. HSF1 was originally recognized as the principal stress-responsive regulator of the heat shock response, but now HSF2 is known to modulate HSF1-mediated expression of heat shock protein (HSP) genes through heterocomplex formation. On heat shock, HSF1 and HSF2 accumulate into nuclear stress bodies (NSBs), where they bind to satellite III repeats. HSF1 is also a regulator of immune responses and cancer. So far, the regulation of HSP genes in ageing has most intensively been examined in Caenorhabditis elegans. Both HSF1 and HSF2 have been ascribed regulatory functions in several developmental processes, such as oogenesis, spermatogenesis and corticogenesis. HSF4 is involved in the development of different sensory organs in cooperation with HSF1, but has no role in the heat shock response. Murine HSF3 is the most recently identified mammalian HSF, which participates in the heat shock response by binding to the PDZ domain-containing 3 (Pdzk3) promoter10 (Åkerfelt et al., 2010).

Our main topic is the molecular mechanisms by which the different members of the HSF family are regulated during normal development and under stressful conditions. In particular, we investigate the expression and activity of HSF1 and HSF2. We have found that HSF1 activity is primarily regulated by various post-translational modifications (PTMs), e.g. acetylation, phosphorylation and sumoylation. All these PTMs are induced by stress stimuli but their effects on HSF1 vary. Upon stress, HSF1 undergoes phosphorylation-dependent sumoylation within a bipartite motif, which we found in many transcriptional regulators and gave name PDSM (phosphorylation-dependent sumoylation motif). Stress-inducible hyperphosphorylation and sumoylation of HSF1 occur very rapidly, whereas acetylation of HSF1 increases gradually, indicating a role for acetylation in the attenuation phase of the HSF1 activity cycle. Among multiple lysine residues targeted by acetylation, K80 is located within the DNA-binding domain of HSF1 and its acetylation is required for reducing HSF1 DNA-binding activity. Importantly, the duration of HSF1 DNA-binding activity can be prolonged or diminished by chemical compounds either activating or inhibiting the activity of the NAD+-dependent deacetylase SIRT1. Our current focus is on a complex network of PTMs to decipher the post-translational signature of HSF1.

We were the first to report that HSF2 forms a complex with HSF1 and regulates the heat shock response. Our studies on HSF1-HSF2 heterotrimers and their impact on various target genes are designed to elucidate the roles of HSFs in protein-misfolding disorders, such as neurodegenerative diseases, as well as in aging and cancer progression. Most studies have focused on HSF1, but it is important to consider the existence of multiple HSFs and interactions between them, especially when searching for potential drugs to modify their expression and/or activity. Our genome-wide ChIP-sequencing experiments to compare HSF1 and HSF2 occupancy in non-stressed and stressed cells for better understanding their actions in various chromatin environments, including cells arrested in mitosis, have opened new paths to study these multi-faceted transcriptional regulators.

Most recently, we reported that HSF2 has a function in regulating stress-inducible transcription in mitotic cells. During mitosis, transcription is repressed and the majority of transcription factors are displaced from the chromatin. However, in mitotic cells with reduced HSF2 levels, HSF1 and RNA polymerase II have retained their capability to access the /Hsp70/ promoter and are able to induce expression of Hsp70. As a consequence, a decrease in HSF2 levels resulted in increased cell survival and fewer mitotic errors upon exposure to stress. Interestingly, HSF2 levels were found to decline during mitosis in some, but not all, cell lines, rendering cells with less HSF2 more resistant against heat-stress (see model by Elsing et al., 2014). Future studies will address how the concentration of HSF2 in the cell is regulated during the cell cycle.

In contrast to HSF1, which is a stable protein evenly expressed in most tissues and cell types, the amount of HSF2 varies and correlates with its activity. Previous studies from our laboratory show that HSF2 levels are regulated by both miRNA, miR-18, in spermatogenesis, and by the anaphase promoting complex/cyclosome (APC/C) in response to acute stress.

A model for transcriptional regulation by HSF2 in mitosis (Elsing et al. 2014). (Left) In mitotic cells, e.g., MDA-MB-231 and WI38 cells, where HSF2 is present, HSF1 and RNA polymerase II are displaced from the hsp70 promoter, which prevents stress-induced expression of Hsp70 and ultimately leads to mitotic problems and cell death. (Right) In cells, e.g., K562, MCF7, and HeLa cells, where HSF2 levels are dramatically reduced during mitosis, the hsp70 promoter is accessible to RNA polymerase II and HSF1, thus enabling Hsp70 expression and cell survival upon proteotoxic stress.

Functions of HSF1 in different cellular processes (modified from Vihervaara and Sistonen, 2014)